When my favorite collector asked me to do dolls of "The Golden Girls" from the classic TV situation comedy, it seemed like a tall order (in the case of Bea Arthur, it was), but it was also a labor of love. The squabbles between the four women were masterpieces in the tradition of radio's "The Bickersons" and TV's "Sanford and Son".The chemistry among the four principals was comically explosive - Betty White's clueless Rose Nylund, Bea Arthur's deadpan Dorothy Zbornak, Estelle Getty's spunky little Sophia Petrillo (Dorothy's Mom), and Rue McClanahan's promiscuous Blanche Devereaux. They all had their moments, but the anchor to the comedy was definitely Bea Arthur's masterful comic reactions. No comic actor ever got as many laughs from a deadpan stare as Bea Arthur. The ladies are (as always) completely hand-sculpted and constructed by hand. All of their costumes and accessories were entirely handmade as well. Each lady had her own distinctive mode of dress (which defined her character) and it was fun capturing that. The dolls range in size from towering Bea Arthur (17 inches) to tiny Estelle Getty (14 inches).

One of my most popular subjects has been the legendary Bette Davis, whose career spanned six decades and an incredible range of roles. For a long time her signature role was the temperamental diva Margo Channing, 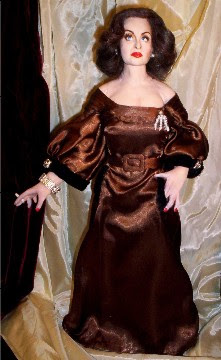 from Joseph L. Mankiewicz's "All About Eve" (1950).
When I first did a doll of Margo, I
assumed her Edith Head dress from the "bumpy night" party scene was maroon or burgundy (the film was black-&-white). My friend and doll customer Greg Schreiner of Los Angeles, who owns the original movie costume, informed me that it was brown, so the second time I did Margo, I did it in the authentic color. Ultimately, of course, Bette would top herself (and everyone else) with the greatest film performance by any actress, the tragic, frightening, hilarious and poignant "Baby Jane" 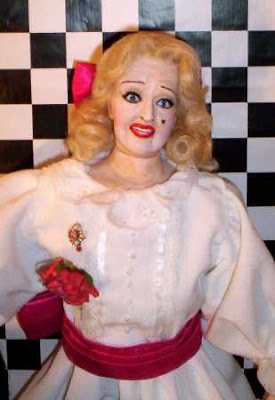 Hudson in Robert Aldrich's classic film of Henry Farrell's novel "Whatever Happened to Baby Jane?" (1962). I did Baby Jane as part of a set with her beleaguered wheelchair-bound sister Blanche (played by Bette's long-time arch-rival Joan Crawford). More visitors to my"Celebrity Dolls" page come to see Baby Jane than any other doll. Another great Davis role (and another spectacular costume) was "Jezebel" (1938) in her scandalous red ball gown. My most recent Bette Davis doll 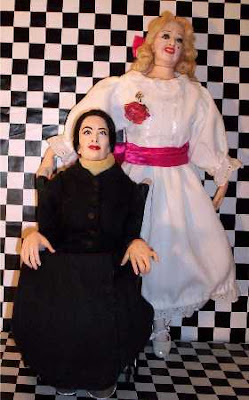 was as Charlotte from another Aldrich film of a Henry Farrell tale, "Hush...Hush, Sweet Charlotte" (1964). This time around, the great Agnes Moorhead got to chew the scenery as poor Charlotte's rather eccentric servant Velma. The pair are the embodiment of the term "Southern Gothic". 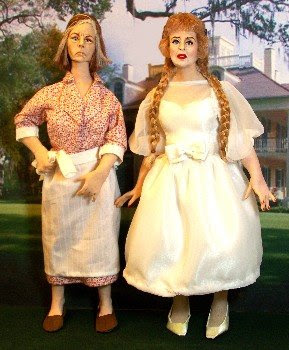 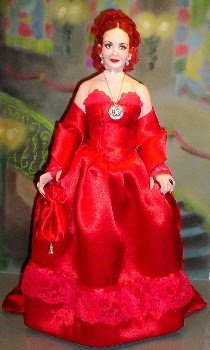 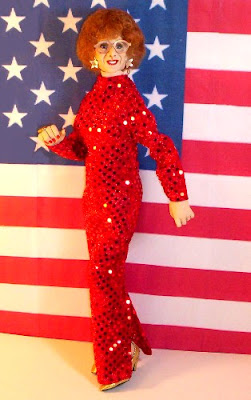 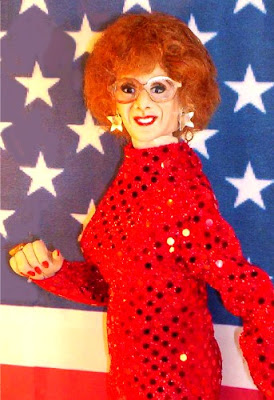 Do you miss Tootsie? You don't have to . She's right here! It was a labor of love for me to recreate one of my favorite actors, Dustin Hoffman, in one of my favorite movies, "Tootsie". As Dusty said in the film, "I was a better man . . . as a woman, than I ever was with a woman as a man. Know what I mean?" No, neither did I. But the results were hilarious. It didn't hurt that the director was Sidney Pollack and the writer was Larry Gelbart. Hoffman's Michael Dorsey/Dorothy Michaels characterization was acting genius. My "Tootsie" doll is 17 inches tall, and completely handmade. As always, he/she's a fully poseable doll. The head, breastplate, hands and feet are sculpted from polymer clay. The body is made of cloth-over-wire-armature construction, with polyester fiberfill stuffing. Dorothy's floor-length sequined gown is hand-tailored, and all accessories - the shoes, earrings, eyeglasses - are individually hand-crafted as well. I sold this one to one of my favorite collectors, who lives in Fresh Meadows, Queens, New York. From there, Tootsie could easily commute to her day job on the soap opera "Southwest General" at National Video's studios on West 42nd Street in Manhattan. (The fictional soap opera's studio in the film was the actual soundstage where "Tootsie" was filmed! In my other career as an actress, I once videotaped a TV commercial for "The Money Store" at National Video, and it looked exactly the same as it did in the film.)
Posted by Alesia at 9:15 PM 3 comments: